When she's dangling from a piece of equipment or jumping through an obstacle course as part of her training for "American Ninja Warrior," Plymouth Whitemarsh High School sophomore Avery Glantz said she doesn't really feel nervous or fret much about getting hurt.

"Sometimes I think I should be more worried than I am," she said with a bashful laugh.

But that confidence is what has brought the 16-year-old to the national stage, where she will appear on the next season of "American Ninja Warrior," slated to begin its 13th season on May 31. "American Ninja Warrior" is an NBC reality television show where athletes compete to get as far as they can, as quickly as they can, through a challenging obstacle course. Athletes must climb, jump and dangle their way through various obstacles without falling in order to win the competition.

According to an NBC press release, the new season will feature more than 400 competitors and it is the first time the age 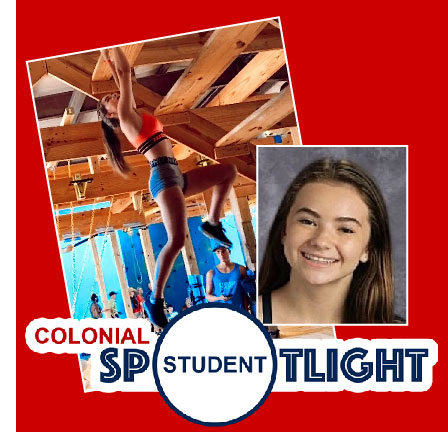 limit has been lowered to 15 years old. Avery said she is one of 30 teens from across the country to be selected based on her video application and her experience in previous competitions in the National Ninja League and on the show "American Ninja Warrior Junior", which she competed on in 2019.

The 10th-grader started her athletic career as a gymnast and rock-climber, and through those sports, she heard about ninja gyms where she could practice her craft. When she first began her journey to become a ninja, Avery said she faced some criticism from her peers.

"It was definitely challenging at first. People made fun of me for a while, but when I got on the show they were all congratulating me," she said.

The experience has taught her the value of perseverance and a strong work ethic. She works out six days a week, spending half her time at a ninja gym in New Jersey and the other half at a rock-climbing facility. She practices course runs and enjoys the upper body challenges the most.

"It's definitely something you have to work at," she said. "I did other sports that did help."

In addition to building strength and endurance, Avery said a lot of the training involves practicing strategies like visualization. In fact her "American Ninja Warrior" mentor, Najee Richardson, emphasized that quite a bit. Najee, an athlete who competed for six seasons on the show, helped her develop some of those skills.

"It's a very mental thing on the show. You don't know anything about the course before you get there," she said. "I felt really good the day of the competition. Every single move feels like it's in slow motion, so it was definitely a little scary."

Avery's episode is expected to air in mid-June. Until then, she is sworn to secrecy about the outcome. But she talked readily about what it was like to be on set of the show she has watched for many years.

"It was so cool," said Avery. "It was surreal being there and feeling all that adrenaline on the starting block."

There were also way more cameras than she thought there would be, and she spent a lot of her time doing interviews and working with the other teens. Many hours were spent on the set to film what ends up being an hour of TV. The episode also had to be filmed in a different way due to COVID-19 restrictions. Typically, family and friends of the athletes line the obstacle course and cheer on the competitors. But only fellow competitors were allowed to be on the sidelines and most friends and family had to watch virtually, Avery said.

Becoming a Ninja has even led to a business opportunity for the high school 10th-grader. She is now part of the young team of executives who make up Bucket of Chalk, LLC. Bucket of Chalk was initially just a team of young Ninjas who competed together, but has since expanded into a business where the teens created their own line of chalk -- a valuable tool in a competition where competitors must have a strong grip. Purchases of the chalk, made from premium grade magnesium carbonate, support the team, which Avery became a part of through her friendship with one of the founders.

In addition to being an entrepreneur and athlete, Avery also demonstrates strength in the classroom, according to her school counselor, Lisa Genovese.

"Avery is a strong, conscientious, highly-motivated student who consistently achieves high grades in rigorous honors level classes. Her cumulative grade point average is over 4.1," said Ms. Genovese. "Avery has an upbeat, positive attitude and is always polite and mature."

Upon entering her junior year, Avery intends to participate in Plymouth Whitemarsh's International Baccalaureate Career Programme, a new career-related study path for students at the high school. She is hoping to attend college and possibly study sports psychology.

Interestingly, Avery joins a small but elite team of other Colonial School District students who have also appeared on TV as ninjas. Willie Waerig, currently a Colonial Middle School seventh-grader, appeared on "American Ninja Warrior Junior" in 2018. Adam Naids, a Plymouth Whitemarsh High School graduate, appeared on the show in seasons 10 and 11.