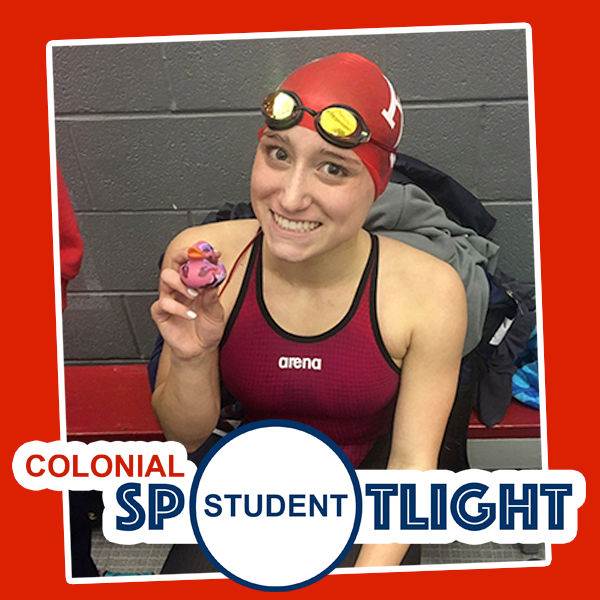 Stories of hard work and dedication by successful student athletes are not new or rare. But the path Plymouth Whitemarsh High School (PWHS) sophomore Mia Ruggiero took to break the school record in the 100-yard backstroke was one less traveled and strewn with obstacles most don't have to face.

A swimmer her entire life, the Distinguished Honor Roll student was looking forward to competing on the Colonials swimming team as a freshman. However, the summer before her first year at PWHS Mia realized something was wrong with her foot. She had a noticeable limp and experienced discomfort while doing even simple things. As the pain worsened, Mia's mother took her for an x-ray. The diagnosis was tendonitis with wearing a boot and physical therapy prescribed.

As the weeks progressed and swimming practice began, Mia's foot worsened and began to swell. A return trip to the doctor and an MRI revealed a large tumor that had eaten away 80 percent of her calcaneus (heel) bone.

"I was so shocked because tumor was such a scary word to me," Mia said. "They told me I could get it out with surgery and that was something else that shocked and scared me. I was expecting bad things because of the pain."

Surgery was scheduled a few days after Christmas. A week before, the Colonials competed in the annual Upper Dublin Cardinal Classic. It was the first big meet in Mia's high school career and when she found out it would be the last meet of her freshman year, she was determined to do her best.

"I ended up swimming my best time in the 100 backstroke and was very proud of myself," she said. "When I got out of the pool and saw my coach, I learned I was only four tenths of a second away from breaking the school record."

That made Mia determined to break the record this season.

After successful surgery in which the benign tumor was removed and cadaver bone inserted to replace the affected bone in her heel, Mia began her recovery. She spent the first three months in a wheelchair, followed by one month on crutches and then additional time walking with a boot. Mia was able to get in the pool before she began to walk.

"What kept me motivated was mostly my family. My family is the most important thing in the world to me," she said. "My friends as well were so sweet and supportive and would help me around school even if it affected their timing. My swim coach Kevin (Golebiewski) also was a big help in keeping me motivated and making sure I was ready to get back in the water."

"To take away the one thing that had been a constant in her life for so long was devastating for her," said Coach Golebiewski. "It's no surprise that the minute she was cleared to get back in the pool she was ready and eager to jump in. She has been one of the hardest workers on the team this year."

The hard work paid off. At the Cardinal Classic this past January, Mia realized her goal of breaking the school record with a time of 1:01.82 in the 100 backstroke.

"When I broke the record this year I was so beyond happy because that was me overcoming that awful tumor that honestly caused me lots of problems and struggle," she said. "I am thankful for getting the tumor in a way though, because it taught me so many life lessons and it made me be so thankful for everything that I have."

In addition to the 100 backstroke, Mia also competes in the 100 butterfly and 200 and 400 freestyle relays. In 11 dual meets this season, she recorded 11 first-place finishes, six second-place finishes and a third-place finish.

"Mia should have made the district team last year," said Coach Golebiewski. "Now we're looking to make that goal a reality at Suburban One Championships to be held at Upper Dublin on February 15. Now that there is no pressure to break the 100 backstroke record, all we have to do now is see how fast she can go over the next two years."

Due to impending inclement weather, Colonial School District facilities will close at noon on Saturday, January 18. All events and activities after noon on Saturday are cancelled.