Plymouth Whitemarsh High School students Tilly McLaughlin and Paige Sarro are gaining some real-life experience in news and television production now that they have started a news show called "Around the District."

At the same time, they are also playing a role in educating the community about what is happening in the Colonial School District. Their most recent episode is an interview with Superintendent Dr. Michael Christian about the COVID-19 pandemic's impact on schools. That episode is airing daily on CITV at 7 a.m., 7 p.m. and 11 p.m. (schedule can be accessed by clicking here) and can be seen on the CITV YouTube channel here: https://youtube.com/playlist?list=PLsi-WUmF3ak92tCdnhgg5gJ4xI1iPpPqX 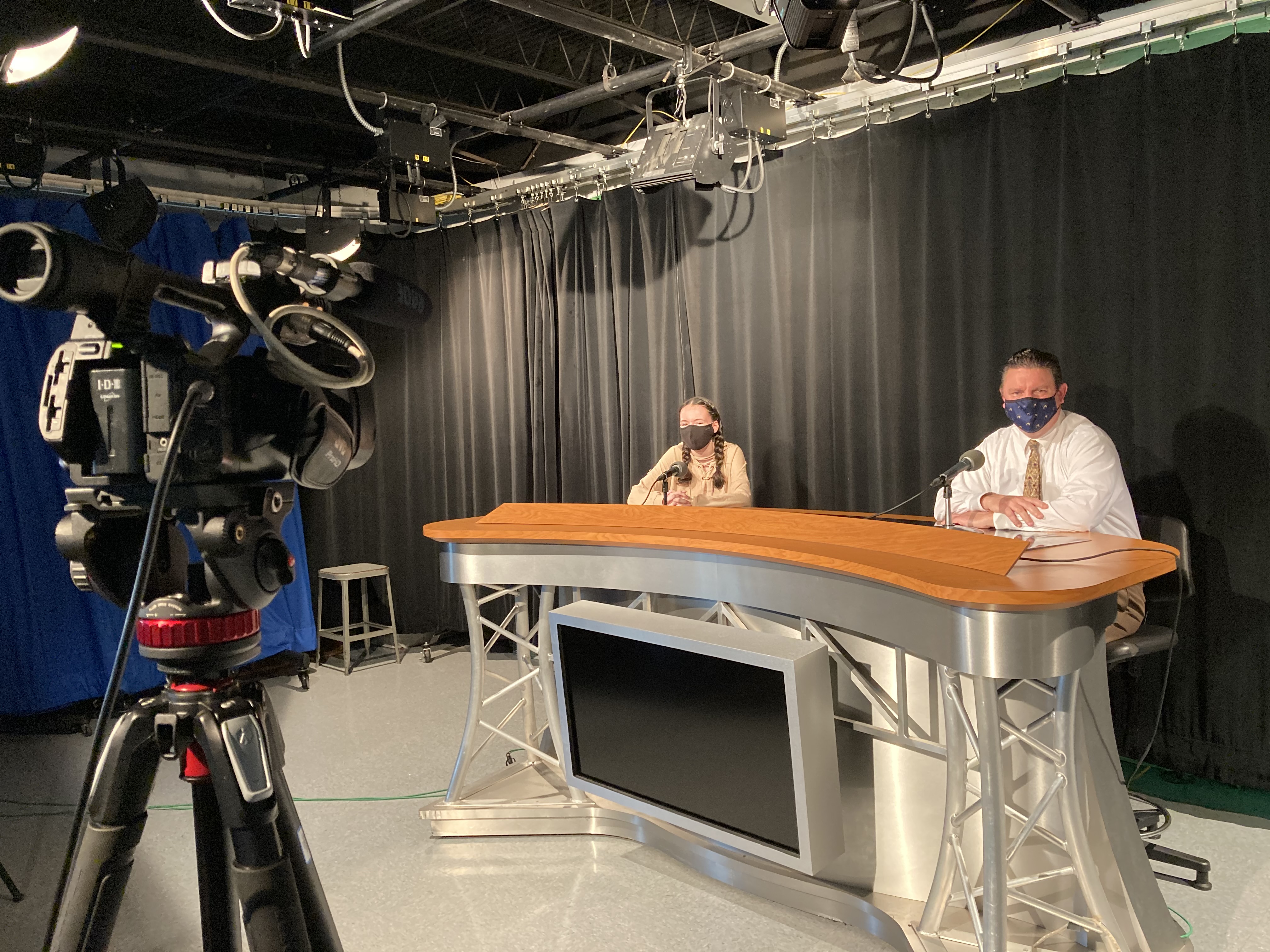 The interview with Dr. Christian was the first to occur in the CITV studio since the pandemic began. Tilly, who serves as host, asked Dr. Christian a series of questions about safety measures in place now that the district is back to five days of in-person instruction. Page served as technical director during the show by selecting different camera shots to use during the studio interview. Both students edited the show to prepare it for viewing.

The current "Around the District" episode is one of three the students have produced this year. The idea for the show came from the students' participation in the Media Production Club.

"I was reflecting on my past years of school and realizing how many bonds I had made with previous teachers. I was also a new member to CITV along with Paige, so we were still both trying to figure out what our places were in this club," said Tilly. "I was messaging her and had asked what she thought about a show that was focused solely on the K-8 schools. She thought it was a good idea and had told me that I should pitch it during our next meeting. I did, and we immediately got to work on figuring out what the format was going to be."

The students began in fall of 2020, so interviews of other district personnel initially took place via Zoom. One show focused on community/school activities at Colonial Middle School, and another featured the Cradles to Crayons charity event organized at Conshohocken Elementary School.

"Our intent with the show is to get word out in a more personal way. With 7 schools in the district, a lot of events in one school may not even be heard of at another. Anyone can read it on the website, but we want to create a way to share news directly with the people, and in an enjoyable way to watch," said Paige.

Both students work on the shows on their own time, during free class periods or after school as part of their involvement in the high school's Media Production Club. They are assisted in their work by Tom Peeler, club sponsor and the district's Digital Media Producer. The ninth-graders are hoping to continue producing the show for the duration of their time in high school, and said they are learning a lot from their experiences.

"I have learned that life can really throw you curveballs. When I started this, I was hoping to be able to go in person and we started with a Zoom format instead. Life can do many things that don't go according to plan, and you have to roll with the punches," said Tilly, who thanked her family, Paige and her teachers (Chris McWilliams and club advisor Tom Peeler) for supporting her efforts. "If I didn't roll with the punches, I wouldn't have this amazing show and be able to work with these amazing people."

Paige noted that producing the show has led to her learning a lot more about the district in which she lives and goes to school.

"I love learning about what other schools are doing and sharing it, because not a lot of people know what's going on. I have learned a lot about different staff members, and relationships between the schools and organizations," she said.