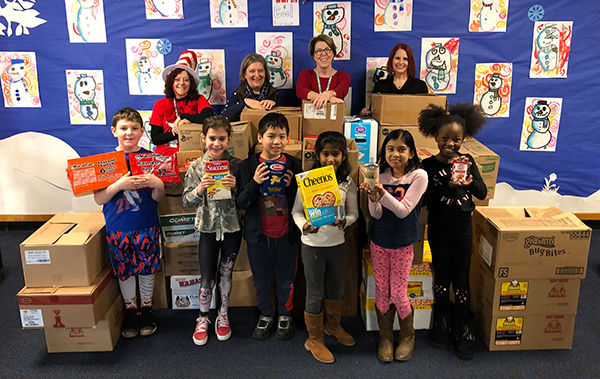 From October through April, Colonial School District schools each take a turn bringing in food donations for the Colonial Neighborhood Council (CNC) Food Drive. In February, Ridge Park Elementary School (RP) had the goal of bringing in 1,600 items.

"We're giving them to people who are homeless and don't have any food," said Brynn Kelly, a third grader at RP. "I like that, because we're being really nice people and giving them some food."

"I brought in some macaroni and cheese and some ravioli kind of stuff," said RP third grader Grant Jennings. "I know that some people don't have any food, so I wanted to help them."

With the help of volunteers from the school's Parent Teacher Organization (PTO), the third graders counted the items from each grade level, packed them up in boxes and kept track of the progress on a chart in that grade's hallway. By the end of the event, the second grade collection was literally "off the chart."

"We're showing the children that anything is possible. We had a goal of 1,600 cans, and we're over 2,000," said JoAnne Robinson, co-president of the RP PTO. "We all pulled together as a huge team and made our goals happen — and now they can see that anything can happen if they try."

Because the students made their goal of 1,600 items, the children have earned a school wide pajama day. Appropriately, the RP students brought in 2,019 items for their 2019 food drive. For March, the drive moves to Colonial Elementary School.