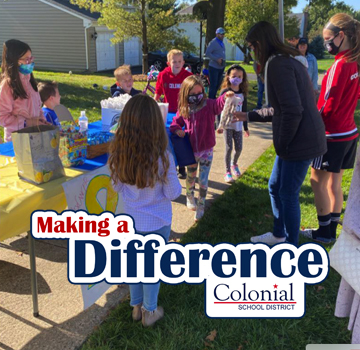 Plymouth Elementary School (PE) students in the Cardinal View Neighborhood recently held a lemonade stand to raise money for the NixCancer Foundation in memory of Nicholas Mincarelli, a PE student whose life was cut tragically short in 2012 due to pediatric cancer.

"It was important, because Nick went to Plymouth just like us, and he was very special," said PE Second Grader Remy Harper.

Because this would have been Nick's senior year at Plymouth Whitemarsh High School, the team set a goal of raising $2021. Due to the generosity of friends and family, the team more than doubled the amount, bringing in $5,026.47.

"We're helping other kids like Nick," said Colonial Elementary School Fourth Grader Liv Harper. "I loved when we got the final total. It was awesome!"

NixCancer Foundation provides support for families impacted by pediatric cancer and raises funds for rhabdomyosarcoma in order to find better therapies and ultimately a cure.