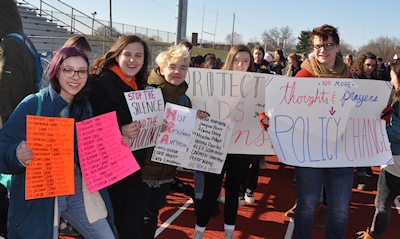 Approximately 1,100 Plymouth Whitemarsh High School (PWHS) students participated in the National School Walkout to protest gun violence on Wednesday morning. Braving the cold, students gathered on Colonial Field and visited tables set up along the track. Several table displays memorialized victims of the recent Parkland, Fla. school shooting and one provided an opportunity for students to register to vote.

The students then filled the home grandstand and listened to keynote speaker Max Milkman, a 2015 PWHS graduate and member of the advocacy group Philadelphia Ceasefire. Milkman encouraged students to let their voices be heard. He urged them to call state and federal legislators and stress the importance of gun control and stopping gun violence. Milkman also said if the legislators don't listen, students should vote them out of office.

"The students did an amazing job of planning and carrying out this event," said PWHS Principal Dr. Jason Bacani. "It's important for students to have the opportunity to express their feelings on important topics. And when they do so in such an orderly and organized manner, they are more likely to have their voices heard." 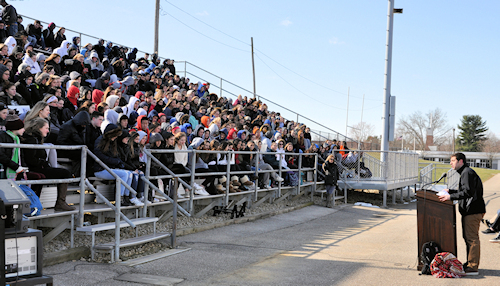 At the same time, a large number a students participated in an in-school walkout at Colonial Middle School (CMS). Students reported to designated areas of the building – eighth graders to the cafeteria, seventh graders to the auditorium and sixth graders to the gymnasium.  The time was meant for silent reflection. Several seventh graders expressed a desire to explain why they were taking part in the event and were given the opportunity to address their classmates. They also observed a moment of silence before returning to class.

Both the PWHS and CMS campuses were closed during the events to provide students with secure settings to stage their walkouts.